Thank you to vote for this article

Could you tell exactly if lisping experienced at first disappears or not?
If yes, how long does it take?

It’s an excellent question and I had already considered a blog page on this subject. You give me this opportunity.

Few studies exist on “lisping” (sigmatism) caused by lingual fixed appliances (Incognito™, Harmony®…), but I saw a few studies conducted on the subject and a colleague of mine and friend from Boston, Dr David Driss, presented an excellent research during the 2011 annual scientific meeting (Annual meeting) of the Angle East Society of Orthodontist. A few months later, in the same year, the AJODO published a similar study from the University of Toronto.

Their study was conducted on 22 individuals. Speech recordings were performed during 6 observation times: before the installation of the expander, after the installation in the mouth, during expansion, during retention, after the expander was removed and 4 weeks after removal. Recordings included the reading of 35 sentences of text among which 3 sentences were retained for analysis.

Some patients adapt better than others to their expander.

In conclusion, the installation of an expander affects negatively speech articulation, but patients adapt with time. The adaptation time varies from 2 to 4 weeks. 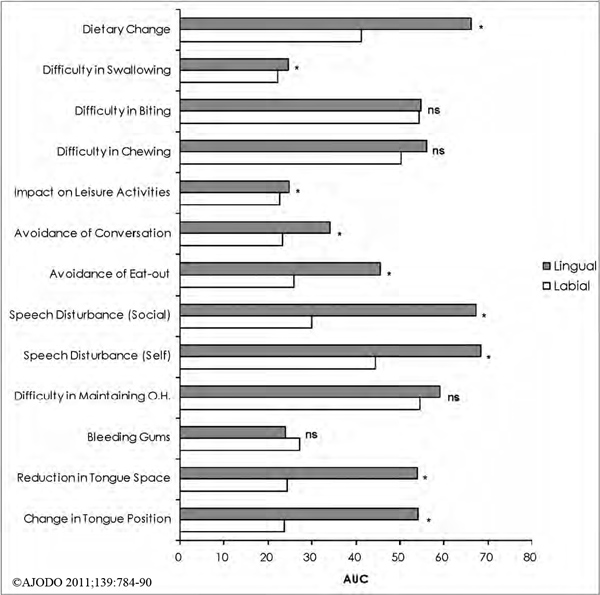 There is a significant difference between the changes observed with lingual appliances versus labial appliances on:

The perception of greater pain with lingual appliances is explained by the reduction of tongue space and the change in tongue position (items 8 and 9). However, after 3 months, there is no difference of perception between both groups.

In conclusion, there are impacts caused by wearing either labial or lingual fixed appliances. These impacts decrease with time. In other words, the patient gets used to them.

It is thus important to inform patients well about the different treatment methods to minimize the unpleasant consequences caused by wearing the appliance. Consequence like: “if I had known…”.